How You See Yourself (Habit, part 7)

We have been talking about habits for awhile now. We have been addressing techniques for changing habits, building new habits, shedding old habits.

Today I want to talk about the more internal reasons it can be challenging to change certain habits. Everything you do – and everything you think – is part of a new habit or an old habit.

In Lisa’s blog, we read about habits of thought – for her, they were self-critical thought patterns. We all have them, but many of us have a habit of listening to them as if they were the truth. Lisa’s new habit was to recognize them as not true. She worked on this for a long time until one day, she realized that she might not be able to truly let go of this negative way of talking to herself, until she also let go of the people around her who spoke to her the way the voice in her head did – critically. (http://www.mclarencoaching.com/habits-that-hinder-progress-habit-part-6/)

Here’s what I realized when I read Lisa’s story – we create our identity — our sense of who we are — through habit. Through repetition of behavior and thought, our brains come to believe we ARE someone with specific character traits.

I have had more than one client (and friend for that matter) who had a habit of being late. That was the behavior and the vast majority of them wanted to change the behavior. The problem was they also had a habit of thought. The thought habit was, “I am a late person. I am always late.” There is a model I love. It goes like this: 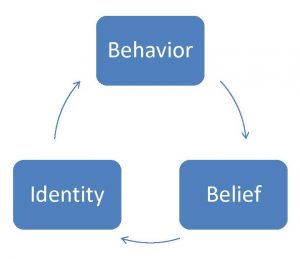 Belief – I am always late. I cannot figure out how to be on time.

Identity – I am a late person.

Changing the behavior is not the biggest obstacle to creating a new habit. If you see yourself (identity) as a “late person” or a “procrastinator” or a “smoker,” the chances of you changing your behavior are quite slim. It’s insidious. Your brain believes you are that person so you stay that person. So where do we begin? The great news is that you can begin anywhere in the cycle. If you change any part of this pattern, other parts will start to change.

Note here, you probably are not always late. Even the latest of people, I have seen be on time sometimes. This is the place to notice what is really happening. Say, “I was late this time.” And per our other blog posts, there are things you can do to change the habit of behavior. Change just one aspect of the behavior and you will start to change your belief about yourself as well.

Belief – I am always late. I cannot figure out how to be on time.

Identity – I am a late person.

If you tell yourself you are always late, then you start to believe you are a “late person.” Once you see yourself that way, change becomes more challenging. When you tell your brain you are “this kind of person,” your brain stops looking for other ways to be.

Originally Lisa had a behavior – talking to herself critically and listening to that voice as if it was true. She had a belief that the overly critical voices in her head were true. She saw herself (identity) as a person who was whatever that voice said – “lazy,” “unmotivated,” “unable to change.”

When she changed her behavior and decided not to listen to the voice as much, her belief about the criticisms changed and she started to believe maybe she was not “lazy” and all those other criticisms. Then she started to see herself (identity) as a different person – a person who worked hard and cared about her clients and did her best for them.

Once this cycle started to change, it became much easier to see where the other habit – listening to her sister’s critical voice – was out of keeping with her new identity. It is a cycle of change. It does not happen linearly. You can, therefore, support your changes in behavior but also changing your habits of thought and who you think you ARE.

Our next training will be coming June 19, Tuesday.  Info on content is below.  Take a look.  Tickets are not on sale yet.  You are going to get a special early bird rate for the first two weeks the tickets are on sale.  Early bird pricing will be a flat rate of $100.  Regular price will be $149.  Email today if you are interested.

Enrollment is “the art of getting someone else to do something you want done because he wants to do it.”  (Eisenhower)

Enrollment is a specific communication skill that is effective everywhere and will vastly improve all your results – in business and elsewhere throughout your life.

When you master this skill of communication, you will be able to enroll:potential clients and customers in hiring you, buying your product or service

In this workshop, you will learn the R.E.A.L.I.T.Y.™ model of enrollment – a specific communication tool that will afford you the results above and more.

People who learn and practice this model report increases in their efficiency and improved results in all areas of life.

Participants will learn how to:

(Note: Scroll to the end of the blog to learn about our communication training offer ending Monday.) We (some of my clients and I) have been writing...

END_OF_DOCUMENT_TOKEN_TO_BE_REPLACED

Another guest blog from a beloved client.  Enjoy! Quitting smoking is easy...I’ve done it a million times. Yeah. That was me. That nasty, smelly,...

END_OF_DOCUMENT_TOKEN_TO_BE_REPLACED

Below is a guest blog, from another attorney who I have the privilege of working with. Notice how insidious some habits are, how we might be doing...