I had a client once who came to many of our calls concerned that sh e was going to be fired. She loved her job and she felt completely out of her depth much of the time. Coaching is always about moving toward a stated outcome and hers was “feel comfortable in my job and get to the next level of competence.” But the belief that she would soon be fired got in the way of her moving to that next level so focused was she on that fear.

And so I asked her, “What makes you think you are going to be fired?” She answered that her boss had taken her aside one day to give her some “hard feedback.” He had told her the ways in which she needed to improve. She had

been there three months.

“How is that conversation an indication that you might be fired?” “Are you kidding?” she asked. “No,” I replied seeming, I suppose a little dense to her. But this is my job as a coach – to challenge my clients’ interpretation of the situation.  So often they do not see it as interpretation, but as solid truth.

“Because he sees how incompetent I am – obviously he wants to get rid of me.”

“Is there other evidence that means you will be fired soon?”

“I wonder,” I said, “if there is any other possible reason your boss took you aside and told you areas in which you need to improve?”

“I don’t know,” she replied, which usually means we are getting close.

“Well I suppose if I knew that then he would be giving me the feedback because he wanted to make me better because I have a long future with the company and he is invested in my improvement.”

“So it sounds like you would see a different motivation behind his words?”

“And so why do you interpret the feedback as meaning that your job is in danger?”

“Hmmm. I guess because I feel like I am so far in over my head. Maybe I am just looking for evidence to support my fear that I can’t pull this off.”

There are two things at play in the way we interpret our situations. First, we have a multitude of beliefs that have come from many different places, some of them long long ago and which are no longer appropriate, but we still believe them. Things like, “I am bad at math” or “Smart people don’t like me” or “I am not a 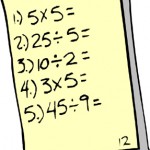 good artist” or “Friendships never last” or “Lawyers are arrogant” or “doctors are rich” or “I’m a loner” or “I can’t do that…or that…or that…” We have so many beliefs that we run our lives by without ever examining if they are true.

The second thing at play is this – human beings love, more than almost anything, to be right. Much as the beliefs are unconscious, this tendency to want to be right is often unconscious too. But the way it plays out is you will work very hard to interpret the situation to fit your beliefs so you can be right. My mom called it a “self-fulfilling prophesy.” If I believe I am bad at math, I notice where I make mistakes balancing my checkbook and I ignore that day I worked out a spreadsheet for profit on pizza sales for our fundraiser. If I believe that “I am a direct person and most often others don’t like directness,” I look for where there is a seemingly bad reaction to my directness and I ignore where it leads to a good result and people seem to be refreshed by it.

We see what we expect to see. What is the antidote? Become very curious about the possible interpretations of what is happening around you. Start to notice WHERE you interpret events. Events are just neutral. We are the ones who put meaning on events. And you can choose what meaning to put on to events.

I know this is scary. What if you really are going to be fired and instead of interpreting that “hard feedback” as meaning you were in trouble, you interpreted it as them wanting to help you because they want you to stay? Then what?  In the end, your interpretation may be right.  But it may not be.  You will improve your experience of your life if you choose a more positive interpretation, or even just to say, “I don’t know how to interpret this.  Maybe I should ask for more information.”  Further, under the self-fulfilling prophesy rule, there is another premise that “what we fear we create,” meaning if you look for the worst interpretation in a situation – e.g., I am going to be fired — you will also tend to act in ways that indicate you are going to be fired and in looking for that evidence, can actually facilitate your being fired.

It can be scary, but you can start to look more in the direction of happiness and truth when you open up to what things really mean – if in fact they mean anything.

There is a wonderful book I read by a doctor named Bruce Lipton. We read it in our coach training.  It is called The Biology of Belief. On some...

END_OF_DOCUMENT_TOKEN_TO_BE_REPLACED

This week, one of my clients told me that when she goes in for a job interview, often they look at her as if they are surprised at her age. She,...

END_OF_DOCUMENT_TOKEN_TO_BE_REPLACED

Recently my coaching group decided to look at ways in which their beliefs were keeping them from having the businesses they want.  I said to them,...