In December 2013, a two-year study was concluded on what traits and characteristics make a good rainmaker. The study was conducted by Lawyer Metrics. (www.LawyerMetrics.com.) Several legal publications have written articles on the results. Most interesting to me is the article by Law360.com. In it, a special consultant on the study, Patricia Gillette, an Orrick Herrington & Sutcliffe LLP employment partner, noted “What makes people successful at rainmaking are the personal characteristics they display when they are trying to sell legal services. Tactics alone aren’t sufficient. What seals the deal is the ability to connect with the person to whom you are trying to sell your services.”

The study distinguishes between rainmakers (RM’s) and client service providers (CSP’s). (It is important to state at the outset that both the study and the 360 article acknowledge the value and necessity of both RM’s and CSP’s.)

One interesting distinction to me as a coach, is that some of the traits that make a RM are, or can be, learned. “Focused training can encourage motivated lawyers to understand their own attitudes about work and client development, adapt their behaviors and improve their results,” according to the article. “Firms can deconstruct how their own top performers behave. Behaviors that are described and modeled are behaviors that can be emulated.”

“Some lawyers are natural rainmakers, while others don’t have the interpersonal skills or reputation, according to Gillette. Between those two extremes are lawyers who can be taught.”

“Sometimes an attorney needs a challenge to act outside his or her comfort zone,” according to Gillette. “It’s about identifying a trait and pulling it out.” (http://www.law360.com/articles/513629/rainmakers-are-born-not-made-for-the-most-part)

This is where hiring a coach can be helpful. Through coaching one can learn what are sometimes called the “soft skills.” These are skills like communication, effective listening, connecting with others, and yes, even risk-taking. There are qualities we are born with and others that we learn. Often people do not recognize how many characteristics can be taught or modeled. As stated in the article, behaviors that are modeled are behaviors that can be emulated.

I find this article is exciting for a couple reasons. I have been working almost exclusively with attorneys for over six years. While the legal profession is beginning to recognize the value of coaching, it does not yet widely employ coaching as a methodology for change. (Thought it is definitely on the rise.  See end of blog for relevant articles. ) I believe this is in part because our profession does not recognize the incredible value of those so-called soft skills. These are not skills taught in law school. We do not come out of law school knowing how to communicate well, engage with others and listen. Indeed, the law school experience and subsequent practice of law often lead to the opposite result – a reliance on speaking and arguing and far less likelihood to listen, engage and connect with other people. But these skills can be learned. Whether one is a CSP or RM, they are invaluable lawyer skills.

“In short,” says Parker-Stephen [a Lawyer Metrics researcher], “the analysis indicates that a fair number of CSPs already have attributes that are associated with rainmaking. Moreover, many CSPs—not only those who score above the rainmaker means—may be natural candidates for coaching to help them develop the traits most associated with rainmaking.” (The American Lawyer, Are Rainmakers a Breed Apart? http://www.americanlawyer.com/id=1202639514788/Are-Rainmakers-a-Breed-Apart%3F#ixzz31p6p8Z8D)

Law schools don’t teach appropriate risk-taking either. This is often considered more a personality trait than a skill. By the way, when we talk about risk-taking in this context, we are not necessarily speaking of jumping out of airplanes or of reckless death-defying behavior. We are speaking of calling potential clients, following up even after being rejected, marketing, networking, shaking hands, connecting, and building relationship with strangers, booking speaking engagements, etc. For many people these activities may as well be free falling from an airplane.

While it is true that some people are naturally more oriented to risk-taking than others, this is a skill that can be taught. Let me offer an example – myself. I practiced law for 16 years. I am by nature not a risk-taker. I am analytic, thoughtful and would characterize myself as an introvert. I excelled at research and writing when I was practicing law. I did not go to court except in the second chair. But when I went through coach training, I realized I wanted to teach coaching skills. Only one problem, being naturally risk-averse, I could not stand in front of a room. Indeed, I felt hot and flush even thinking of raising my hand in a class. Today, I speak to large groups of people on a weekly basis, if not more. I learned the skill of risk-taking. 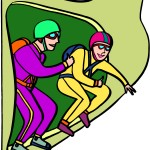 The way I learned this skill? I worked with a mentor coach. I was working with her on training other coaches and she knew I wanted ultimately to be in front of the room. So she told me to stand up and speak in the coach trainings. First she had me speak at the back of the room – nothing formal, just stand up if I had something to say. Little by little, she had me come closer to the front of the room and more and more she asked me to deliver certain material to the class. Was I nervous the first time we did this? No – I was absolutely petrified. They say fear of public speaking is greater than fear of death for most people. But I learned; it did not kill me. And have used the learning I acquired to not only speak in public, but run my own coaching business, which requires a great deal of networking, marketing, meeting and calling new people who often say “no” to me. Some of it I enjoy. Some of it I do not. Much of it still scares me. I usually need to rest after conducting a workshop. I love doing trainings and speaking, but it also wears me out because it is not my natural state. Yet it is a skill I have learned, made a living at and thoroughly enjoy.

This is the job of a coach – to push you beyond where you think you can go in support of what you tell the coach you want. RM skills can be learned by those who are open, willing and committed. Consider finding a coaching to support and challenge you (or your firm members) to generate those results.

Articles on the rise of coaching in the legal profession:

Why Should Lawyers Hire Coaches?

Why and When Should a Lawyer Hire a Coach? Today, instead of writing my own blog, I am giving you excerpts from an ABA article in GPSolo, the...

END_OF_DOCUMENT_TOKEN_TO_BE_REPLACED

So you want to Write a Book?

I wrote the following article for Source Point Training Company's (SPT) weekly newsletter.  SPT is the company that provided me with my coach...

END_OF_DOCUMENT_TOKEN_TO_BE_REPLACED

Law Firms Thrive With Coaches to Support Them

I recently read an article in The Recorder on the rise of coaching in law firms. The article noted that a growing number of firms are hiring coaches...